I am officially on a filmmaking kick. It took my 3 years of procrastination, but once I got over the hump, I became hooked.

It’s interesting how filming activities with my kids enriches the experience. This happens for a couple reasons. One, typically Brenda isn’t there with my and the boys when we’re doing something worth filming and so me and the boys want to show off for Brenda to show the video to her when we’re done. Two, because it’s all hands free, I get to be completely immersed in what we’re doing and be a full participant while still knowing that I am capturing it on film. Three, I am obviously not on my phone, wasting time or being a piece of crud dad being physically there but mentally away because, frankly, I want to make the video cool and worth watching and worth showing to Brenda.

In the film below, you will see a couple scenes. One, is just simple biking with Ashton near our house in Saratoga Springs. Another is of me and Ashton out back at this little dirt hill. A third is Oliver, Ashton and I at the Ranches Mountain Bike Park and surrounding foothills, doing some BMX and mountain biking. Obviously, I am doing all the work there! Lastly, is a super heroes (the kids) vs super villain (me, as Darth Vader) fight for Ashton’s 5th b-day.

In the intro, Brenda is asking the kids, “so what did you guys do this week?” and they respond, “oh, nothing!” But, the sound doesn’t really come in unless you jack up the volume. 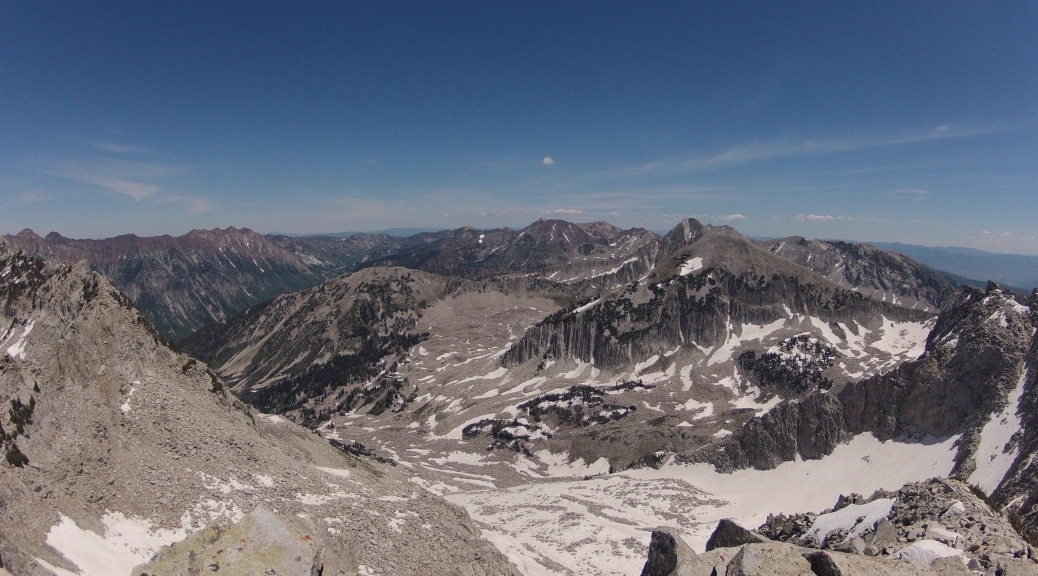 I love my babalicious wife, Brenda. We are exact opposites in pretty much every way. I grew up swimming my whole life. That girl can barely keep her head above the water. I am a thrill-seeker and she is a home-body. I believe in corporal punishment for the kids when necessary and she is a pacifist. I love camping and she detests the thought of bugs. I love the cold, she hates it. I love snow, she dreads it. She loves talking about feelings, I’m “dead inside” according to her. She enjoys all these TV drama series and I don’t touch them with a ten-foot pole. She’s a bit of feminist in a way (she’ll deny it) and just hearing the “F” word gets my blood boiling (little exaggeration there…). You get the picture. And these are not clichés. Anyone who knows us at some point has scratched their head about how we ever got married.

One thing we have in common is we strive to make each other happy – which usually involves some form of “major” sacrifice of our inner being’s deeply held tenets of how life should be.

Last weekend, for example, my brother Darrin was in town on a family ski trip to The Canyons. My family and I all went up. It was a breakout day for Ashton as he and his cousin Ava just killed it all over High Meadow. I had never seen him ski that well. And Oliver was just as happy as pie (see fun video below). When we got down to the car, I was exhausted and really hating the hike to get off the mountain (walk, gondola, walk, cabriolet, walk, load up – Canyons has issues there) and was definitely PO’d, but overall felt pretty awesome about the day. Brenda on the other hand, could only think “nightmare”! It was a real sacrifice for her to come along.

For Father’s Day 2013, Brenda’s gift to me was a free day to go hiking. This was a real sacrifice for her as it meant a Saturday alone with all three of our psychotically energetic kids. I decided to head up to Lake Hardy with my cousin Jeremy Bikman (Bikman) and my buddy Jeremy Goff (Goff). Brenda probably predicted it, while I thought “nah, I can turn around”, but a hike to the lake turned into a summit of South Thunder. Whoa. What a hike.

The first leg of our journey was done by mountain bike. Holy &@%$balls! I had been diligently doing P90x and am naturally a strong climber, but I had never experienced uphills like some of those I encountered on our way to the 2nd Hemagog, by bike, on a jeep/service vehicle/hiking/what the heck trail. My quads were hashed before I reached the 1st Hemagog and I was thinking “I’m toast.”

Between the 1st and 2nd Hemagog, we encountered crazy amounts of underbrush jabbing into the narrow hiking trail, enough so that we finally decided to ditch the bikes and continue on foot. I was so nervous that we were never going to see our bikes again. Either someone was going to get a 5-finger discount on about $12K worth of hardware or they were going to be lost to mother nature.

Now in true Lorin Bird fashion (and I think true Bikman fashion as well), we had no idea where the trail went after the 2nd Hemagog. I’m not sure I even bothered to consult anything before I went on the hike. (As an aside, I think I’ve been lost so many times that not being lost would be an aberration. Lost is the norm for me, I guess). It gets into a scramble to Lake Hardy and then a scramble from Lake Hardy to the summit. There are cairns, but you continually lose them. In the end, all you do is look up, guestimate on where it is you want to go, and then try to go there.

We all brought enough water for Lake Hardy, but nowhere close enough for the summit. Ha ha, there would have been three dead dudes on the side of some cliff if I hadn’t by some luck decided to bring my Katadyne water filter. It wet our whistle from Lake Hardy all the way to the summit and back down.

Lake Hardy was incredible. It really is such a beautiful lake nestled in a bowl that seems to sit atop a stand, looking out over the valley, as the mountain falls away steeply below and there is something of gorge that cuts away south. It was here that I faced the moment of truth. And of course I cracked! Bikman turns and says, “Bird, you know we have to summit right? Ask for forgiveness later, dude.” We both looked up at the “summit” (ah, the wonders of false summits) of South Thunder and it looked sooo close. It stared at me, taunting me, tempting me, beckoning me like a siren. And like one of Odysseus’ men, I was oh so easily enraptured. “Onward and upward my good man.”

Now the classic Wasatch Scramble began. I love Wasatch scrambles precisely because I hate them so much. The more I hate them, the more I want to conquer them. I couldn’t turn back, though. The thought of the view spurred me on. My quads had already been destroyed in the first couple hours of endless uphill biking. That wasn’t going to change. “Might as well make the pain worth it, right?” I thought to myself.

We had no idea where we were going. As we hit the crest of the false summit and looked over to Lone Peak and down Bells Canyon, we just started wandering around the ridge wondering where the heck the summit was. We knew it was to the right (east), so we headed up and east. Somewhat comically, I stumbled upon the summit as I came around some rocks and realized “hey, I’m at the top!” I then jumped up some rock ledge and really onto the top for a completely unobstructed 360-degree view. Wow, what a view! I couldn’t savor that view enough. I still go back and look at the view. I filmed the whole view with my GoPro and this really gives you perspective on how amazing the Wasatch is. And to think I only drove 30 minutes to reach the trailhead! Accessible and Incredible.

Goff had had chronic knee problems and the scramble down was brutal! Oftentimes, we were jumping from boulder to boulder, pounding the knees with ever leap. It was an incredible feat in my book that Goff finished it given his knee condition. That dude started popping the Ibuprofen like candy!

There were a couple times when my heart started pounding as we came to a cliff or a ledge on the way down and thought, “uh-oh, we’re lost. We’re SOL on this one.” But miraculously, like it miraculously happens on all my other hikes for which I’m never quite prepared, we would find some crazy chute or little ledge or a hole in the rocks (literally) to make our way down. It always looks so different going down than going up!

If you’ve been wondering, yes, we found our bikes. And it was the sweetest feeling in the world at the moment. Lets just say “3 hours up, 20 minutes down”!

We were gabbing away on the bike ride, gabbing away at the 1st Hemagog, gabbing away at the 2nd Hemagog, gawking and gabbing at Lake Hardy, gawking and a little bit of gabbing on the summit, but pretty quiet on the way down to Lake Hardy, almost silent from Lake Hardy to start of trail again and dead silent from there on out! I think we were all focused on getting off that dang mountain (OK, I know I was). Once back at the car, we looked at each other, looked up, said, “wow, that was one sick hike,” didn’t say much else and headed home to load up on more ibuprofen and a hot bath.

For me, when I got home about 6pm, Brenda just said, “3pm, huh? Lake Hardy, huh?” “But babe, you should have seen this thing. I couldn’t resist! Hey, Father’s Day, right?!” Eyes roll, but it was cool. Ask for forgiveness later 🙂

All in all, it was one hell of a hike- 12K vert car to summit to car, with 3 hours of uphill biking, all the while merely “on a hike to the lake”!

The genesis of most things is necessity. I am actually starting this blog because of a class assignment. Necessity, however, is a terrible reason to blog. Passion for something, though, is a great reason.

I am passionate about a lot of things, actually. Debating, for example, is something that I quite enjoy. I love being a husband. I have tremendous memories, and new ones every day, of just being a husband and hanging with my wife, Brenda. I love being a father. I have three kids, Ashton (5), Oliver (3) and Adelle (1.5). They drive me completely bonkers, every day, but I love it.

With so many things to be stoked about, you’d think it would be hard to choose one as the overall theme, but it actually wasn’t. With my family growing up, with my brothers and friends in college, on my own and with my family, I found that adventure was the dominant theme in my life. So this blog is to celebrate life as an adventure…in all its forms…in the outdoors.

I promise to provide as much eye candy as possible with as little text as possible. I love looking at pictures of mountains, far off places, deep blue oceans, bright green fields, raging waterfalls…and yes, mountains. I would be untrue to myself if I blabbered on and on. I rarely care what others have to say in their blogs – I’m usually just there for the pics. So, I promise eye candy. If not for anyone else, at least for myself.